The Euro has put in its worst weekly performance for the year last week falling from a high of $1.1344 all the way down to $1.121 while at the same time removing a key phycological resistance level at $1.1200.

The reason for the swift move downwards is based on expectations that the US Federal reserve will act very aggressively with regards to lifting interest rates this year and the first move is likely to come next month with the possibility of 4 more rate hikes as the year unfolds.

Even though inflation is running at record levels in the Eurozone, the European Central bank have so far resisted calls to lift rates and as we can see by the attitude of ECB president Christine Lagarde, this question is not even on the table yet.

As long as the ECB continues to see inflation as temporary and therefore ruling out rate hikes, the Euro is going to struggle further against the greenback as investors seek out the higher yielding currency and on top of that, as a safe haven currency due to the potential for a conflict between Ukraine and Russia.

Looking ahead on today’s economic calendar, there is a range of crucial data hitting the market during the European session starting with the release of the Eurozone fourth-quarter GDP figures later today and the figure expected by analysts is 4.7% on an annualized basis, well up from 3.9% reached in the previous quarter.

We will also see the release of Consumer Price Index figures from the Eurozone and GDP numbers from Spain which along with the Eurozone GDP figures, are closely connected with inflation. Should we see some strong numbers today, the ECB might finally take moves to address the runaway inflation issue again begin the discussion on raising interest rates. 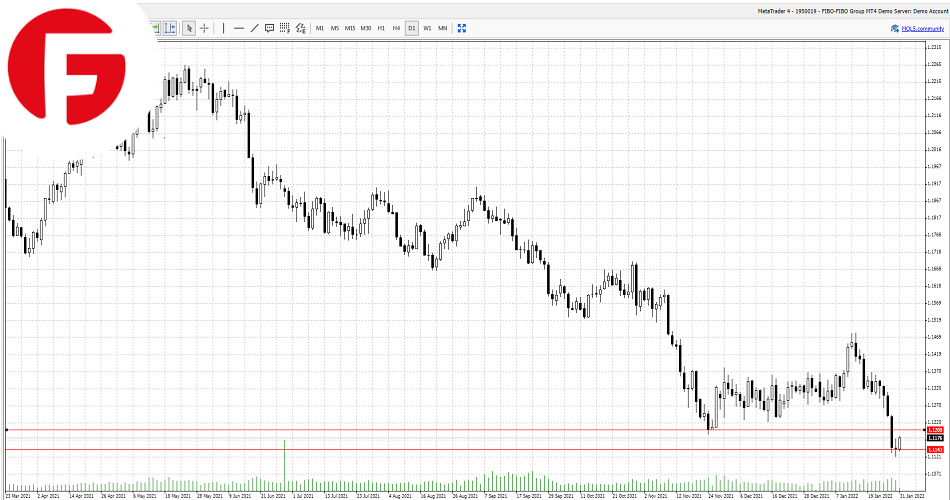 As we can see on the weekly chart, the Euro has found some support at the $1.1143 mark and has made some sort of recovery against the US dollar as we head into the release of the Eurozone GDP figures.

Unless these numbers significantly beat expectations, it is hard to see the Euro moving any higher and it will face significant resistance at the $1.1200 level which was formally a strong support zone. Until we see a change of tone from the ECB with regards to interest rates, it looks like the Euro will continue to grind lower and it is hard to see the $1.1143 resistance level staying in place