The Euro was unable to capitalize on yesterday’s round of economic data and ended the day in the red, which shows that the market is wary about tomorrow’s ECB rate decision and following monetary speech from the ECB

The news released was a mixed bag with the ZEW economic survey from Germany coming in at 26.5 against analysts’ expectations of 30 while the same Euro wide index also fell short of expectations, hitting the market at 31.1, much lower that the market had expected for a figure of 52.2.

The more important news was the quarterly Gross Domestic Product figures from the Eurozone, which came in at 2.2%, smashing analysts’ expectations for a figure of 0.6%, while the yearly number was also impressive coming in at 14.3 against market predictions for a result of 13.6.

The Euro was initially able to rally against the US dollar, but the party was short lived as the trading day came to a close.

As mentioned above, the market is wary of pushing the Euro much higher until tomorrow, as they await the decision from the ECB about their Pandemic Emergency Purchase Programme (PEPP) which is expected to be cut to as low as 60 billion euros a month from the current 80 billion, which would more or less be the beginning of the central bank’s tapering program.

This news is currently priced into the Euro and has been the basis of its rally over the past 2 weeks so if the ECB doesn’t follow through with a reduction, we may see a sharp pullback in the EUR/USD currency pair. 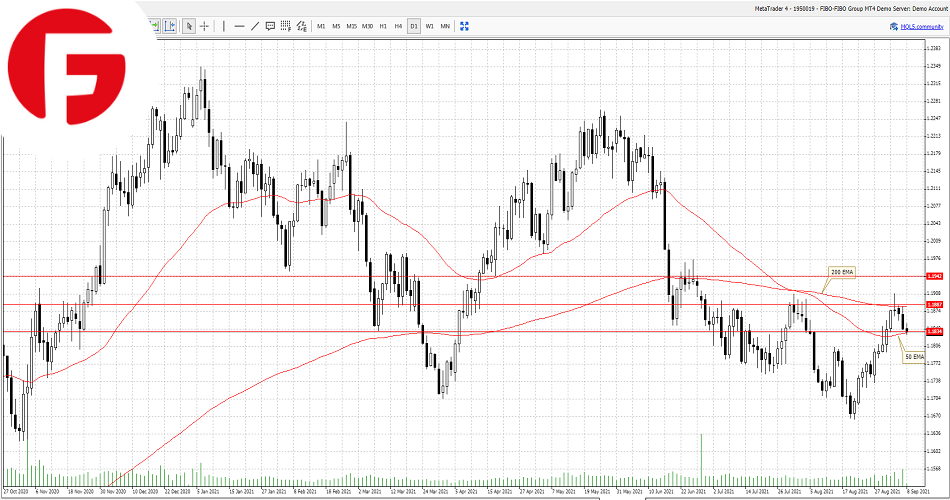 The Euro once again tried to break the key resistance points in yesterday’s trading session which are the 200 day EMA and the $1.1887 resistance level but faced strong selling pressure.

Today, the EUR/USD currency pair remains at the bottom of the consolidation channel between $1.1834 and $1.1887 with the former and the 50 day EMA currently providing support and with no major news due out from the Eurozone today these support levels should be able to hold.

There could be some volatility however during the American session as Investors await a speech by New York Fed President John Williams for any hints on the US Federal Reserve’s proposed tapering program.