Better than expected data from the Eurozone released in yesterday’s trading session has seen the Euro grind higher against its US counterpart and on the surface, it seems as if the European economy is on the road to recovery which is backed up by a reduction in the amount of coronavirus cases.

The latest monthly producer price index from Germany, Europe’s biggest economy hit the market yesterday at 2.3% which was well above analysts’ expectations for a figure of 1% while the yearly figure was also a positive sign coming in at 14.2% against predictions for a number of 12.7%.

There were no surprises regarding the consumer price index figures from the Eurozone which were released to the market on a monthly basis at 0.5 while the yearly figure stood at 1.9% and both numbers were right on consensus amongst analysts.

With no economic news released from the US the Euro was able to hold onto most of the gains made from the news above and end the trading day on a positive note, hovering near a three-week high against the greenback.

As we enter the European session today, the Euro continues to grind higher although it has pulled back from the high of the Asian session at $1.11666 to $1.1649 which shows for now the markets reluctance to push the European currency higher.

The market movers for the EUR/USD currency pair today will be the release of news from the council meeting set to begin in a few hours from the Eurozone where heads of government will put their word in on the outlook of the European economy.

In the American session will see the release of the Initial jobless claims figure which is connected with the employment market and the Philadelphia Fed manufacturing survey, followed by the existing home sales figures which is a key indicator on the state of the American real estate market. 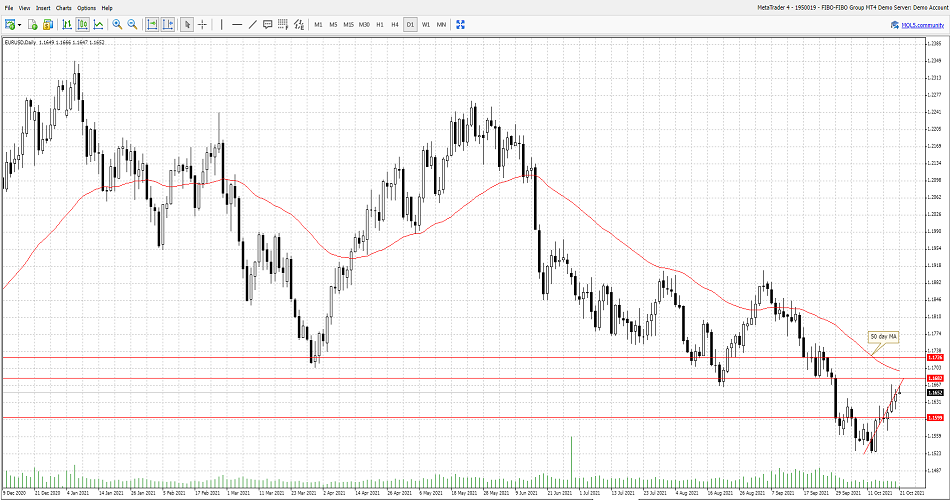 From a technical perspective, the recovery of EUR/USD currency pair remains stuck around the 1.1650 area and the barrier seems to be the upward trend line which began with the latest rally starting on the 12th of October.

This trend line will need to be broken followed by the next resistance level at $1.1682 as well as the 50 day MA which is sitting a little higher at $1.1690.

A break higher above these levels may confirm that the Euro is clearly in some sort of uptrend and may target the next resistance level at $1.1726 although we don’t expect this to happen before the end of the week.