The Euro received an unexpected boost in yesterday’s trading session against the US dollar was heading for its best week since March 2020 after the European Central Bank finally acknowledged that inflation in the 27-member block is causing concerns and may need to be reigned in.

As widely expected, the ECB kept rates on hold at a record -0.25% but it was the following the following speech by ECB President Christine Lagarde that put a rocket under the Euro to drive it to its highest level in nearly 3 months.

In a complete about turn, Mrs Lagarde that there are mounting inflation risks while at the same time declining to repeat previous guidance that an interest rate increase this year was not on the cards.

“Compared with our expectations in December, risks to the inflation outlook are tilted to the upside, particularly in the near term.” she said.

The ECB had been seen as among the most dovish of the world's leading central banks if we pay attention to the Bank of England which has already raised rates twice this year and the US Federal reserve which is expected to begin their rate hiking cycle next month. Analysts are now predicting that the first-rate hike from the ECB will come this year and not in 2023.

"Most significantly, she pointedly refused to repeat her view that rate hikes this year are 'very unlikely,' or even 'unlikely.' In effect, she was telling investors that she now thinks a rate hike this year is likely," he added.

Looking ahead today, the main focus for the EUR/USD currency pair will be the release of the non-farm payrolls figure from the US and the figure expected is around 150,000 new positions will be created against last months figure of 199,000 and any surprises to the upside may halt the Euro’s current rally as it may force the fed to be more aggressive with their rate hikes. 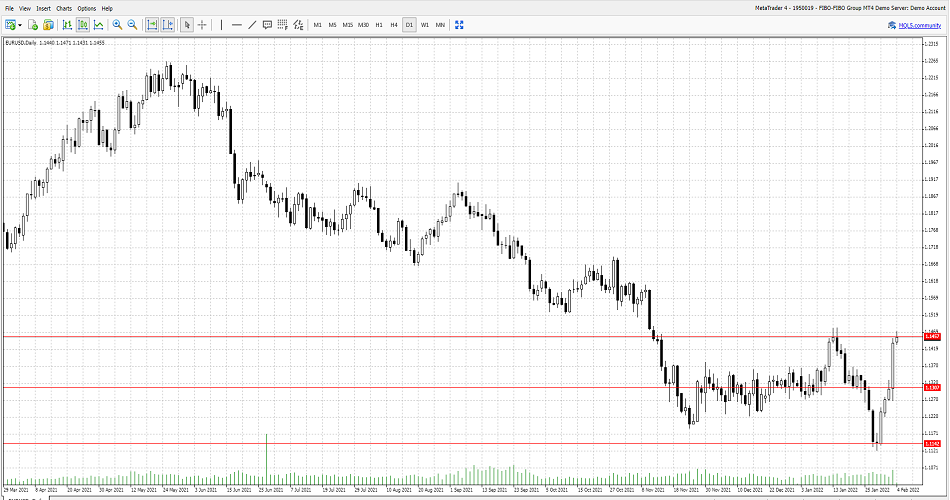 As we can see on the chart, the EUR/USD currency pair smashed its way through the $1.1307 mark and has rallied all the way up to the next critical resistance level of %1.1457 which was last hit on the 14th of January.

The release of the NFP will dictate the direction of the currency pair today and unless there are some unexpected surprises, the Euro may be able to overcome this level as traders ride the wave of optimism surrounding potential rate hikes from the ECB.